I have always been fascinated by train travel, as it has always seemed classy and leisurely.  Perhaps this perception is from the television shows and movies that are based in the 1800-1900s era, which, in my opinion, romanticized train travel.  Maybe it’s the suggestion that train travel is more environmentally friendly than air travel.  Either way, I have been hearing about Amtrak’s Western lines and decided I needed to check it out for myself.

I plan a trip to California every February. Suddenly, I had all the time in the world to get there – which is what happens when you decide to quit your job to do more traveling. I also didn’t have a lot of money, which is another side-effect of quitting your job, so I realized it was a great time to take advantage of my situation and finally ride the train cross country.

From reviews, I read the California Zephyr is one of the best train lines to take in America, and I have to admit, it was definitely beautiful.  I decided to jump on the train in Chicago, which is not far from my current home base of Columbus, OH.  Since I decided to catch the train in Chicago, I was able to see my friend Elsa, who I have been promising for years that I would visit. Bonus! To get to Chicago, I took the Megabus from Columbus for roughly $30.  Megabus is super convenient and they have wi-fi (most of the time).  I had a great time in Chicago.  If you’d like to read more about it, you can read my post titled Chicago on the Cheap.

I left Chicago at two in the afternoon and I wasn’t really sure what I should expect to see. It ended up being mostly farmland and small towns, which is what I figured.  Honestly, there wasn’t much to see the first night, so I decided to sleep instead.  Okay, okay, I fell asleep almost as soon as I got on the train.  I tend to fall asleep ALL THE TIME while I’m in transit.  I can’t help it, if I’m sitting in a moving object, then I probably will fall asleep.

Most of the reviews I have read about Amtrak’s western long distance lines focus on the amazing sleeping quarters. I have no doubt that Amtrak’s cabins are great.  However, I am a budget traveler and just could not justify the cost of a cabin when I was traveling alone. Now, if I was traveling with someone then it would be an excellent deal!  All your meals are included and they even make sure you have fresh coffee waiting for you.  I mean, really, how awesome is that?!?!  Well, as I stated, I did not ride in a cabin, I rode coach.  So I will tell you all about my experience riding coach on Amtrak.

I didn’t think the sleeping arrangements were bad for coach.  You are provided a nice leg rest, as well as an enforced quiet time after 10pm when they turn down the lights as well.  I had plenty of room since there were only a few people in each coach car.  I have heard that the summer month draw in families and therefore the coach cars can be more crowded, but my trip in the winter was lovely. With that being said, I am capable of sleeping just about anywhere (as you already read two paragraphs above).

When I woke up, the sun was rising over Denver and it was beautiful. The train arrived around 8AM, which meant breakfast. As everyone seems to raves about the meals on Amtrak, I thought I would give it a shot.  It seemed like a perfect time to meet some fellow train enthusiasts, as the dining car is community seating.  Unfortunately, it must have been a little too early for the other diner at my table as he was not very talkative. The food was okay and the price was about what was expected – a little expensive for what I was getting, but not too expensive.  Remember, though, they cooked the breakfast on a moving train!  Regrettably, I never returned to the dining car during the remainder of my trip.  I do wish I gave it another chance, as I think it could have been a better experience if I decided to have dinner.

Outside of Denver is where the ride became interesting as the train started to climb higher and higher through the twists and turns of the Rockies.  It was kind of like riding the Matterhorn ride at Disney World, but So. Much. Better.  Climbing the Rocky Mountains made Denver look like a small town in a vast prairie against a mountainous backdrop.  The train continued on through the mountain and then headed into Southern Utah where the Red Rocks provided a new dazzling backdrop. All this is best viewed in the dedicated observation car which enables you to really grasp the beauty of it all.  As an added bonus, it is also a great area to socialize with other passengers.

I decided to jump off at Salt Lake City, as again, I had been promising friends for years that I would visit.  I ended up spending a few days in Utah before boarding the train to finish out the rest of my journey.  If you’d like to read about my adventures in Utah, check out my blog post – Salt Lake City Here I Come, Right Back Where I Started From – to find things to do on a budget.  You can also read my post, Filling my Emulsions, in which I learn how to make French Macaroons from a Chef Adalberto’s bakery who was featured on Food Network’s Holiday Bake Off.

I left Salt Lake City late in the evening, which was sad because I really love the Salt Flats, especially in the late winter and early spring.  Around this part of the year, when it just starts to warm up, all of the water will run off the mountains in the backdrop and fill the Salt Flats with a shallow layer of crystal clear water, which is absolutely beautiful.  During the summer and fall months, you can see the dried cracked flats, which is also an amazing sight to see.  It looks a lot like the desert scenes in the movies, which makes sense as they film a lot of desert scenes there.  Sadly, it was pitch black outside so I was not able to see this beauty.

When I awoke the following morning I had arrived in Reno, NV.  This is where the views became breathtaking again as the train made its way through the Sierra Nevada Mountains.  The views were stunning and even more alluring by the fresh snowfall from the night before.  I, and all of the other passengers, got a surprise as some folks from one of the local train societies boarded the train and talked about the history of the railroad through this section of the California Zephyr line.

As the train meandered down the mountains and into California the snow stayed behind while a vast landscape of green appeared.  It was such a stark contrast, which seemed to change in an instant.  The train traveled through lush fair lands as it progressed towards the Pacific Coast, and before I knew it, the San Francisco Bay was in view as the train traveled closer to San Francisco. 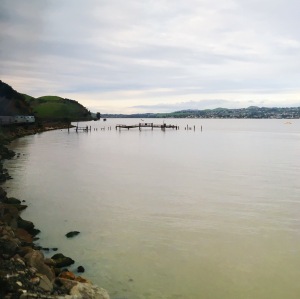 Sadly, the California Zephyr doesn’t make it all the way into San Francisco, so I ended up having to transfer onto a bus for the last leg of the trip. I, however, was very pleased as the bus carried me across the new Bay Bridge.

Overall, I believe Amtrak did an excellent job on timing the trip to catch all the major sights at just the right time of day – even if I was sad to miss the Salt Flats.  I highly recommend riding the California Zephyr line from, at least, Denver to the San Francisco Bay, it will truly be an amazing experience, one which you will not soon forget.

I have always enjoyed the short Amtrak commuter rides in and out of Boston ,New York, and DC. Now that I have taken this trip West across the United States, I absolutely cannot wait for my next trip across the Western frontier on Amtrak.  Next time, I plan to ride up the Pacific Coast on through Montana, North Dakota, and into Minnesota taking the Empire Builder line.

Thanks for reading,
Meandering Mason

If you enjoyed reading about my train travel and would like to read more about the other adventures I mentioned in this post, please check out the links below!

Chicago on the Cheap
Salt Lake City Here I Come, Right Back Where I Started From
Filling my Emulsions

One thought on “I took Amtrak from Chicago to San Francisco and this is what I saw.”